AN INTRODUCTION TO THE TECHNOLOGY OF OPTICAL SYNTHESIS 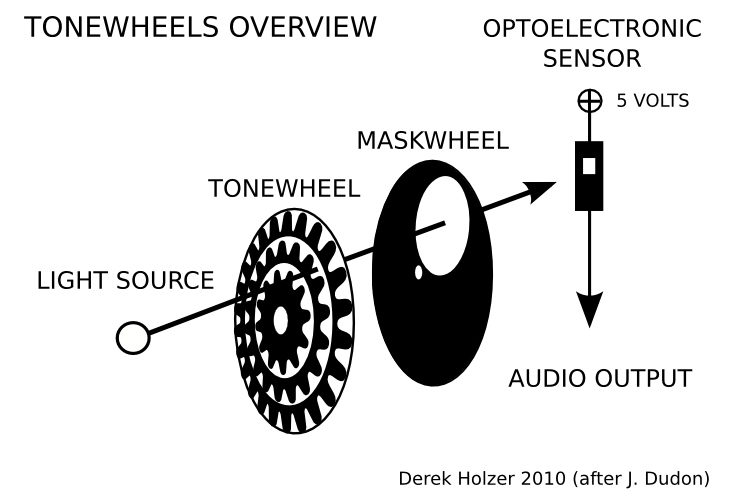 The astonishingly simple technology employed by the TONEWHEELS project creates sound directly from light by means of an optoelectronic sensor. In the diagram above, a LIGHT SOURCE is directed through two transparent, spinning disks. The first disk, the TONEWHEEL, has patterns representing sound waves printed on it. This disk modulates the light in a similar manner as the optical soundtrack of 16mm and 35mm motion picture film. The tone produced depends on both the number of peaks printed on the disk, and the speed at which the disk rotates.

After the first TONEWHEEL, any number of secondary MASKWHEELS may be used to further filter or modulate the light before it reaches the sensor. These MASKWHEELS create the same kind of amplitude modulation as the low-frequency oscillators in analog synthesizers, and are heard as anything from a rhythmic pulse to additional sonic frequencies.

Once the light has passed through these various wheels, it falls on the OPTOELECTRONIC SENSOR, typically a phototransistor or photodiode. This sensor allows five volts of direct electrical current to pass through when exposed to light, and blocks the current when in shadow. From there, the modulated current may be used as an audio signal by connecting the AUDIO OUTPUT to an amplifier and speaker, or it may be sent through a mixer and various other electronic effects for further treatment.

Simple parts are all that are needed to explore optical sound.

Using a phototransistor to modulate the voltage from a battery is the simplest method. This can be connected directly to a speaker, or to some types of mixer channels or amps (line level usually).

To drive multiple phototransistors with a minimum of crosstalk between the channels, a voltage regulator and a few capacitors can provide a stabilized source of voltage to the transistors. Here, jack cables are used to connect the circuit to a mixer via the line inputs.

In order to connect this circuit to many types of audio equipment (mixer inputs, guitar effects, modular synthesizers, etc etc), it is necessary to create an output buffer. Buffers are simple circuits, often using one or more op-amps, which act as the middle-man and help other circuits talk to each other in the the world of electronics. 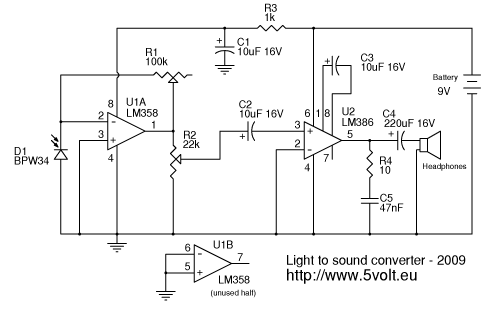 The light to sound converter circuit above was designed by Alex at 5volt.eu. It uses a BPW34 photodiode instead of a phototransistor, and the diode makes a connection to ground rather than to power. That is followed by U1, which uses an LM358 op-amp chip as the buffer. The op-amp is configured as an inverting op-amp, which means it will give positive voltage at the output (pin 1) when it sees a connection to ground at the inverting input (pin 2).

R1 is a potentiometer, which controls the threshold of the op-amp. This means that you can adjust the circuit to the contrast between light and shadow in order to give the strongest signal out. R2 is another potentiometer, which controls the output volume, and C2 is a capacitor which blocks any DC voltage (the constant part of the signal, rather than the part which is AC--the audio part) from going further in the circuit. If you plan to connect this circuit to a mixer, then an output jack can be inserted between C2 and pin 3 of U2, the LM386 amplifier.

The LM386 amplifier chip is used to drive either a speaker or a pair of headphones. This amp has a nasty tendency to self-oscillate, meaning that it produces a tone all by itself. This can be prevented by making sure there are no "ground loops" in the circuit. In other words, each connection in the diagram which leads to the bottom-most line has only a single path or wire leading there, instead of several paths to ground.

I have designed a Printed Circuit Board for this circuit, with an added output jack for connecting to a mixer, here: 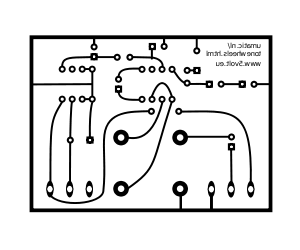 And here is a photo of the completed project: 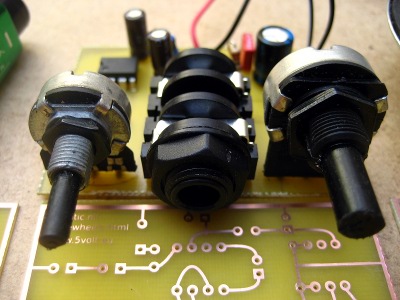 NOTICE: in order to keep the headphone/speaker amp in this circuit from self-oscillating, it may be necessary to make a cut in the copper at the upper left hand corner of the border of the PCB, just next to the printed text when looking at the copper side of the etched board. This is to prevent a ground loop, as mentioned above. This should not be a problem when the jack ouput is used to connect the circuit to a mixer or other device.

COMING SOON: updated PCB to fix self-oscillation problem of the amplifier. When PCB is updated, I will also include a parts mask here so you know which components go in which holes!

In order to control the speed of the motor which spins the TONEWHEEL in front of the optoelectronic sensor, I use this Pulse Width Modulation Motor Speed Controller designed by G. Forrest Cook at Solorb.com:

Please note that I power this circuit with a 12V wall power supply. It is not recommended to use the same power supply for the motors and the light-to-sound converter, as the motor controller produces a lot of electric noise due to the pulse width modulation of the current to the motor.

Mr. Cook has also kindly provided the PCB artwork for this circuit, as well as the parts placement mask:

Silkscreen clarifications: the unlabeled circular pattern near LED1 is a wire jumper and the part labeled FB1 is really R9.

The connections for the 8 pin header on the printed circuit board are as follows:

Please refer to G. Forrest Cook's site for more information on this circuit.

This page is under development for the TONEWHEELS project, as part of a residency at the Tesla media arts laboratory, in Berlin, Germany over the months of Oct-Dec 2007, and at STEIM during the last two weeks of February 2008, and I am grateful for their support. Further technical support was provided by Martin Howse, Jeff Mann and Manfred Fox in Berlin, and Marc Boon in Amsterdam.